As an Amazon Associate, we earn commisions from qualifying purchases.

Computer Monitors were first primitive and often limited to display very limited amounts of information to the users. But the massive technological advancements we’ve seen in the past few decades have evolved monitors to be something more sophisticated and informative. However, in recent days, deciding on a monitor/display for your personal use is rather different and complicated than it was several years ago. The wide range of new and old display technologies has made it more complex where one needs to consider the size, type of display panel, resolution, and backlighting when buying one. However, the most important decision you need to make is which display panel type fits best for you.

However, before getting into more details regarding these display panel technologies, it is quite important that we understand and know the origins of displays in general, from the very first technology used in modern monitors, CRT displays.

What is a CRT Display? 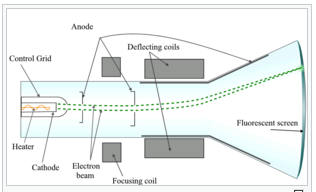 A Cathode Ray Tube monitors functions exactly as its name suggests; through rays of light. One or several electron guns are projected onto a phosphorescent screen to display images in a vacuum tube. When compared to LCD monitor panels, CRT monitors can have a higher contrast ratio, very low response time, and very little input lag. The downside is displays were bulkier in size and seen in most early days’ televisions and computer monitors. Also, they consume more power, produce flicker, produce slightly distorted images. Their use slowly declined over the years as they became more impractical in this current generation of technology, where everything was focused on becoming more convenient to users. Therefore, people transitioned onto more ergonomic and convenient displays such as LCDs with various display technologies over time. The real-world applications of CRT display are in the field of military, medical, and government. They use CRT in control panels and machinery. 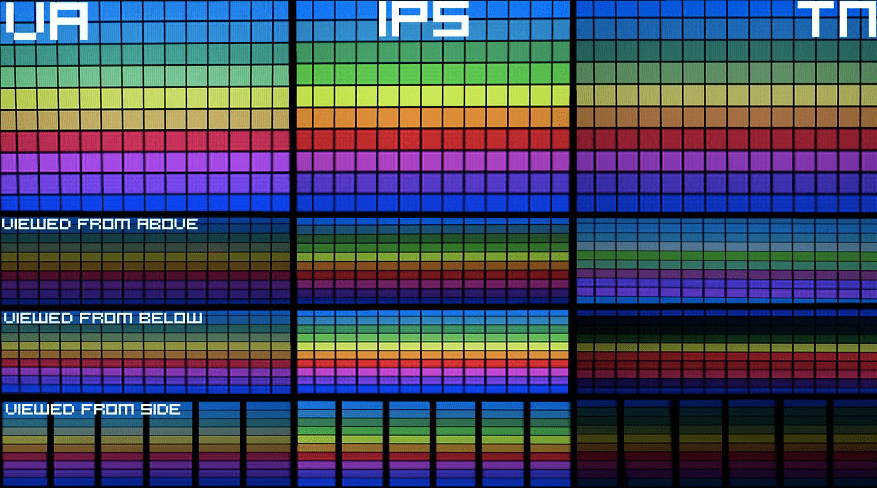 In this current technological era, there are 3 major display panel technologies that excel in different areas in performance. They are:

What is a TN Panel?

The Twisted Nematic panel is used in this modern technological age. TN was the first type of LCD panel that came to general use, and the technology behind them dates back to the ‘80s. It uses the twisted nematic effect where liquid crystal molecules are precisely controlled to display light and images under the action of an applied electric field. To put it into simpler words, the crystals can twist the polarization of the light 90° to matching the orientation of the second polarizer to get through it or align to the first polarizer for the light to not pass. TN panel delivers higher response rates than VA or IPS panels and also the cheapest out of the bunch. They have the lowest input lag—typically around 1ms. If you are a hardcore gamer then the TN panel is best for you. However, all of these great performance specs come with a great price. They also have the worst color accuracy among the current technologies, and their viewing angles are really bad.

What is an IPS Panel?

In-Plane Switching panels are the most common type of display panels used today due to the best viewing angles and great color accuracy. The crystals in this display technology are always horizontal to the two polarizers, and they twist 90° horizontally to turn off and on in order to display images. They are the most expensive ones in the market right now due to their professional-grade color accuracy levels, and they get even more expensive as the refresh rates increase. IPS panel monitors are suitable for graphic designers, photo and video editors, programmers, and gamers. Most IPS panels come with response times of 4-5ms although some of the new models can manage response times as low as 1ms. IPS stands as the go-to display type for most users due to t0 the best viewing angles and great visuals.

What is a VA Panel?

Vertical alignment panels are the middle between IPS and TN panels. VA panels use liquid crystals that are aligned either vertically or horizontally to the two polarizers to display images instead of twisting them like in the TN technology. The crystals align vertically and horizontally to the two opposing polarizers in off and on states, respectively, allowing the light to pass and block in the process. They offer the best contrast ratios than IPS and TN panels. These displays are usually the least responsive. But they can be pushed to get higher refresh rates, and the current VA panels come with both high refresh rates and lower response times. Even though they fall behind IPS in color accuracy, VA displays more contrast images and has the better color quality and viewing angles than TN panels. VA panels are ideal for general use and are great for gamers who enjoy single-player or casual experiences.

TN vs IPS vs VA: Which One is the Best for You?

Choosing a specific display type for your use can be a little tricky as all 3 of these modern display panel technologies have their own pros and cons. The first thing you need to decide when choosing one is what type of work you are going to use it for if it is for professional work, regular usage, or for gaming needs. Once you have decided that, you can go on to come up with a budget you are willing to spend on the display. This is important as prices can be deceiving in the world of monitors where you might spend a good fortune on one and not get the maximum use of it. For example, TN is the cheapest type of display in the market as of now, and they come with higher refresh rates and fast response times. This makes it a good choice for competitive gaming needs, but if you are also a content creator or a professional, their color accuracy might cause you problems in the long run. IPS displays are ideal for professionals, but they often come with lower refresh rates making them bad for competitive gaming. VA panel displays are a balance of both good color quality and higher refresh rates. This makes them ideal for general use and casual gaming, but their response times can get a little slower, giving you a disadvantage in a competitive environment.

Nevertheless, today’s displays of all of these display panel technologies have been upgraded to meet the standards of the current market. Especially, VA panels and IPS panels have seen a great improvement where VA’s responsiveness has been greatly improved, and IPS’ refresh rates have been increased significantly. However, these upgraded versions can still be pretty expensive, so you must make the decision yourself by deciding what type of work you are going to use the display for.

Ankit is a software engineer. A pro lover of Technology and tech gadgets. I am a gamer too. Our team is here to help you find the best monitor products to decide which one is best for you.

We use cookies on our website to give you the most relevant experience by remembering your preferences and repeat visits. By clicking “Accept”, you consent to the use of ALL the cookies.
Cookie settingsACCEPT
Manage consent

This website uses cookies to improve your experience while you navigate through the website. Out of these, the cookies that are categorized as necessary are stored on your browser as they are essential for the working of basic functionalities of the website. We also use third-party cookies that help us analyze and understand how you use this website. These cookies will be stored in your browser only with your consent. You also have the option to opt-out of these cookies. But opting out of some of these cookies may affect your browsing experience.
Necessary Always Enabled
Necessary cookies are absolutely essential for the website to function properly. These cookies ensure basic functionalities and security features of the website, anonymously.
Functional
Functional cookies help to perform certain functionalities like sharing the content of the website on social media platforms, collect feedbacks, and other third-party features.
Performance
Performance cookies are used to understand and analyze the key performance indexes of the website which helps in delivering a better user experience for the visitors.
Analytics
Analytical cookies are used to understand how visitors interact with the website. These cookies help provide information on metrics the number of visitors, bounce rate, traffic source, etc.
Advertisement
Advertisement cookies are used to provide visitors with relevant ads and marketing campaigns. These cookies track visitors across websites and collect information to provide customized ads.
Others
Other uncategorized cookies are those that are being analyzed and have not been classified into a category as yet.
SAVE & ACCEPT